Abstract
Necrotizing sialometaplasia is a rare, benign, self-limiting inflammatory process, with most cases occurring in the palatal region. Although the pathophysiology of this condition remains unknown, it has generally been considered an ischemic reaction involving the minor salivary glands. Due to its clinical and histologic similarities to malignant salivary gland tumor, diagnostic biopsy is required. Careful monitoring is also recommended, and clinicians should provide sufficient information for pathologists to ensure the histologic diagnosis.
Keywords : Ischemia; Minor salivary gland; Necrotizing sialometaplasia; Palate

Necrotizing sialometaplasia (NS) is a rare, benign, self-limiting inflammatory process, with most cases occurring in the palatal region [1]. It was first characterized by Abrams and Melrose in 1973 [2]. It composes only about 0.03% of oral biopsies and has a predominance in White individuals. Although the pathophysiology of this condition remains unknown, it has generally been considered an ischemic reaction of the vasculature involving the minor salivary glands [3]. It typically requires no treatment and heals spontaneously. To distinguish this process from malignancies and to confirm the diagnosis, clinicians should be aware of both the histologic and clinical features of this rare disease to avoid performing unnecessary surgery. If possible, determining the etiologic factors of this disease is also recommended to prevent recurrence. This report presents three cases of NS with the aim of raising awareness and assisting clinicians in differentiating this condition from malignant processes such as squamous cell carcinoma or mucoepidermoid carcinoma. The study protocol of this study was approved by the Institutional Review Board of the School of Dentistry at Seoul National University (S-D20220007).

A 20-year-old female with an unremarkable medical history had a rapidly growing lump on the right side of her hard palate after receiving endodontic treatment of the maxillary second molar (Fig. 1A). Initially, her general dental practitioner perceived that her palatal swelling was related to the infected tooth and attempted simple incision and drainage but failed. A gutta-percha point was also inserted to trace its origin; however, no tract to the maxillary molar was found. The patient’s dentist referred her to the Seoul National University Dental Hospital with concern of oral cancer. Clinical examination revealed that previously treated maxillary second molar was tender to vertical percussion and palpation. She reported acute pain and swelling on her hard palate that developed subsequent to root canal treatment 10 days ago. She also stated that she had suffered from headaches spreading to the nose before her visit. Cone-beam computed tomography revealed swelling of the palatal soft tissue, but no significant pathological finding was observed from either the previously treated #17 or surrounding alveolar bone (Fig. 1B). The palatal edema was presumed not to be of odontogenic origin, and malignant tumor was suspected as the clinical diagnosis. Hence, incisional biopsy was conducted, and saliva-like fluid was detected during the operation.


Histopathological findings included pseudoepitheliomatous hyperplasia of the overlying epithelium at low power. Diffuse necrosis of the salivary glands and metaplastic squamous islands of the ductal epithelium were observed at the connective tissue (Fig. 2). Nevertheless, the lobular morphology of the salivary gland was intact. Chronic mixed inflammatory infiltration was composed of neutrophils, lymphocytes, plasma cells, and eosinophils. Histologic evidence led to the final pathological diagnosis of NS.


After 2 weeks, a stable healing process was observed (Fig. 1D), and complete remission of the ulcer was achieved 2 months after incisional biopsy.

A 51-year-old female who complained of an ulcerative lesion on the left posterior palate was referred to the Department of Oral Medicine, Seoul National University Dental Hospital. Unilateral palatal swelling was first discovered 8 weeks previously, and no prodromal symptom was found. The patient presented with a crater-form defect with an indurated and raised edge after receiving laser therapy on the lesion 10 days before the visit. The ulcer was 20 mm in diameter (Fig. 3) and asymptomatic. Necrotic debris covered the base of the crater-form lesion. She was a nonsmoker without a contributory medical history.


The provisional diagnosis included mucoepidermoid carcinoma, adenoid cystic carcinoma, major aphthous ulcer, and NS. A hematologic test was performed before incisional biopsy, and no clues of syphilis were found.

Microscopic results demonstrated squamous metaplasia of the ductal epithelium and acinar necrosis (Fig. 4). Mixed inflammatory infiltrates including lymphocytes were scattered throughout the lamina propria. The lobular structure of the minor salivary gland remained. The histopathologic features confirmed the diagnosis of NS.


No treatment was provided, and complete recovery by secondary intention healing was achieved within 6 weeks without any sequelae (Fig. 3).

A 64-year-old female presented with a nonhealing ulcer located at the hard palate, slightly left of the midline (Fig. 5A). Initially, the patient noticed erythematous swelling, which evolved into ulceration after she received laser therapy 4 weeks before her visit. Computed tomography examination of the head and neck was performed with contrast medium. Radiographic examination showed a superficial mucosal defect at the middle of the posterior hard palate (Fig. 5C). Neither tumor-like contrast-enhancing lesion nor significant lymph node was detected. Based on the radiologic and clinical examination, the lesion was suspected to be either traumatic ulceration or NS. Given the fact that the patient did not complain of any pain and there was no initial palatal swelling, the disease was assumed to be closer to a diagnosis of NS rather than traumatic ulceration. The palatal ulcer healed spontaneously within 4 weeks (Fig. 5B).

NS, which was first characterized by Abrams and Melrose in 1973 [2], is an uncommon, self-limiting disease that mainly occurs on the minor salivary glands of the palate. It composes only about 0.03% of oral biopsies and has a predominance in White individuals. NS can occur in patients of all ages, but males are affected twice more frequently than females are. Nevertheless, all those affected in NS were women in our three cases. Although the etiology of this rare disease remains unclear, the most widely accepted triggering factor is infarction of the salivary glands caused by involving blood vessel ischemia [3,4]. The infarction can be related to various causes, including traumatic injuries, surgery, ill-fitting dentures, tobacco, alcohol, upper airway infection, intubation, and so forth. Local anesthesia has also been indicated to precipitate NS, possibly accounting for the palatal swelling observed in case 1 of this study [5]. Recently, studies have presented a few cases that occurred in relation to anorexia or bulimia [6,7].

NS commonly affects the posterior palate three-quarters of patients; however, sites other than the palate, including the retromolar pad, gingiva, lip, tongue, nasal cavity, sinuses, or larynx, can also be affected [8]. About two-thirds of NS cases in the palatal region are reported to be unilateral [9]. The initial signs include submucosal swelling and may or may not include pain or paresthesia. Possible prodromal conditions may encompass fever, chills, or discomfort [10]. After 2 to 3 weeks from onset, the defect turns out to be a crater-form ulcer with raised edges ranging from 1 to 5 cm in diameter. Pain is not usually reported at this stage.

As described by Anneroth and Hansen in 1982 [11], the histopathology of NS comprises five stages: infarction, sequestration, ulceration, repair, and healing. It is difficult to strictly separate the histologic stages; rather, the microscopic features run the gamut of ulceration, squamous metaplasia of ducts, acinar necrosis, pseudoepitheliomatous hyperplasia, and diffused inflammatory background [1]. Coagulative acinar necrosis in the early lesion precedes the development of metaplastic squamous nests involving the glandular duct and pseudoepitheliomatous hyperplasia during the healing process. In case 1, an incisional biopsy was performed in the early lesion, and rounded squamous metaplasia of the ducts was detected only in the deep section of the specimen. Since the diagnosis may be obscured by the existence of a deeply seated metaplastic island with pseudoepitheliomatous hyperplasia, it is recommended that a distinctive biopsy sample be obtained from the base of the ulcer or the most indurated margin of the lesion. Saliva-like liquid detected during the biopsy performed in case 1 was suspected to be mucin excretion. Preservation of lobular morphology and the absence of nuclear atypia in the metaplastic nests can act as a diagnostic clue. If needed, focal absent immunoreactivity for p53 protein, low immunoreactivity for Ki-67, and p63/calponin-positive myoepithelial cells may also help to distinguish NS from carcinoma [12]. In the present cases, hematoxylin–eosin staining was enough to confirm the histologic diagnosis of NS.

NS is a benign condition of the salivary glands that commonly requires no treatment and heals spontaneously. Complete recovery usually takes up to 10 weeks (average 5.2 weeks) without specific treatment [10]. Nevertheless, its clinical appearance can resemble malignant neoplasm such as mucoepidermoid or adenoid cystic carcinoma [13]. Close monitoring of the lesion is also required because there have been a few cases of NS accompanied by carcinoma [14,15]. There are a few reports in the literature of surgical management, especially in cases of unusually large ulcerative defect, providing better circumstances for healing.

Although surgical procedure is not mandatory, considering the clinical resemblance of NS to carcinoma, incisional biopsy is recommended for diagnosis verification [16]. It is important for the clinician to be aware of both the microscopic and clinical features of this rare disease to avoid misinterpretation or inappropriate surgical procedures. 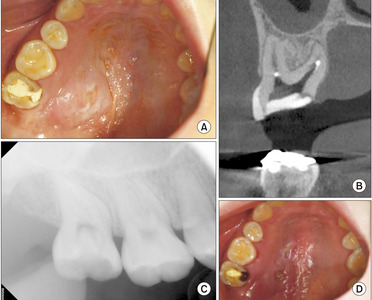 Fig. 1. Clinical and radiographic features of case 1. (A) A bulging mass was observed on the right palate. (B) Cone-beam computed tomography view demonstrating palatal swelling. No significant pathological finding was observed from #17 or alveolar bone. (C) Periapical radiograph showing no inflammatory lesion at the apex. (D) The lesion subsequently turned into mild crater-form defects 2 weeks after incisional biopsy.

Fig. 3. Intraoral view of the left posterior palate in case 2. (A) Ulcerated crater-form lesion with a diameter of 20 mm after receiving laser therapy on the lesion 10 days before the visit. (B) The lesion subsequently healed 2 weeks after incisional biopsy. (C) Complete healing was achieved at 14 weeks from the onset. 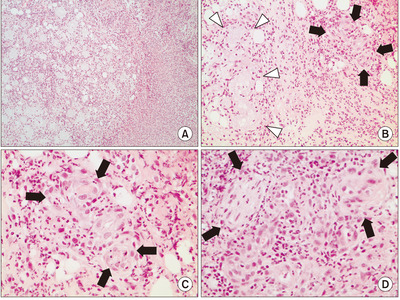 Fig. 5. (A) Crater-like defect of the posterior hard palate. (B) The lesion subsequently healed after 4 weeks. (C) Coronal head and neck computed tomography scan showing a superficial mucosal defect at the middle of the hard palate (arrow) in case 3.