This study was supported by research fund from Chosun University Dental Hospital, 2018.
Received August 13, 2019; Revised September 1, 2019; Accepted September 1, 2019.
This is an open-access article distributed under the terms of the Creative Commons Attribution Non-Commercial License (https://creativecommons.org/licenses/by-nc/4.0) which permits unrestricted non-commercial use, distribution, and reproduction in any medium, provided the original work is properly cited.

Actinomycosis is rare, chronic, slowly progressive disease caused by gram-positive anaerobic organisms from the Actinomycosis family that normally colonizes the oral cavity. Actinomycotic osteomyelitis is even more rare and refractory disease because diagnosis by bacterial culture is not easy. In our case, 80-year-old man visited our clinic with a complaint of swelling and severe sinus tracts without teeth evolvement on anterior mandible. Computed tomography (CT) scan demonstrated erosive bone destruction on anterior mandible, clinically suspected actinomycotic osteomyelitis. The patient also had thoracic actinomycosis on Lt. lower lung. We could diagnosis actinomycosis by histopathologic examination. He treated by conservative surgery and long term antibiotics. After 2 year, no recurrence was seen in CT scan.

Actinomycosis is rare chronic disease caused by spp. and once mistaken for fungal infection [1]. spp. is Gram-positive anaerobic bacteria, including , . , . , . . They can be found in calculus, gingival crevices, infected dentin and commonly live in pharynx and tonsil [2]. Actinomyces has no pathogenic potential when exposed to normal skin or healthy mucosa. Once losing membrane continuity by trauma or dental surgery, Actinomyces can invade into mucous membrane and form localized abscess [3].

Pus culture and bacterial examination is needed for diagnosis. Culture of spp. require specific oxidation-reduction condition associated with microbiome. In clinic, diagnosis of actinomycosis can be difficult even in highly suspected. Several months of antibiotics are required of treating actinomycosis and it can recur if treatment is stopped early. Making early definite diagnosis is important for preventing recurrence of actinomycosis [7].

There are few case reports of actinomycosis and even much rare case reports of osteomyelitis by Actinomyces except for medication related osteonecrosis of jaw. This report is about a case of 80-year-old man with actinomycotic mandibular osteomyelitis, which is identified later to co-infection of cervicofacial and thoracic type.

A 80-year-old man presented with mandibular incisor pain and swelling. Pain has been for 20 days and there was no surgery, trauma history and no underlying systemic disease. In physical examination, right cervical lymph node enlargement and multiple fistula in mandibular lateral incisor, canine, first premolar and first molar were observed. Elective pulp test on those teeth were all positive and no suspected teeth involvement was observed in panorama (Fig. 1) and periapical view. Clinically, actinomycosis was suspected and pus culture and bacterial examination were held but failed to culture actinomyces. Computed tomography (CT) and biopsy were perfomed for diagnosis. Irregular destruction on mandibular incisor labial bone was observed in CT (Fig. 2) and histological examination confirmed actinomycotic osteomyelits. Patient was admitted to the emergency room presenting with severe swelling on right lower face, pain and limited mouth opening during administration of prescribed amoxicillin under cooperating with divsion of infectious diseases. In enhanced neck computed tomoraphy, there was abscess pocket showing irregualr constract enhancement in right submasseteric space and pterygomandibular space (Fig. 3). drainage on pus pocket and curettage of bone on incisor area were performed under local anesthesia.

Meanwhile, chest compute tomography was performed as routine ward laboratory examination despite of no symptom, observing tuberculosis-like lesion in left lower lobe in chest X-ray (Fig. 4A). Considering patient’s history, disseminated actinomycosis was suspected, left lower lobectomy was performed under general anesthesia in department of cardiothoracic surgery. It was finally confirmed actinomycosis by histopathologic examination. Patient was prescribed doxycycline over 10 months after discharge. After 2 years, patient visited for another reason with no sign of recurrence of actinomycosis. CT showed healing state of mandibular bone (Fig. 5).

After first reporting of actinomycosis, misunderstood to fungal infection in 1845 by Van Langenbeck, Bollinger et al. assumed that Actinomyces bovis were fungus breaking out ‘lumpy jaw’ in cow. Wolff et al. succeeded in isolation culture from human body in 1891 and Waksman concluded that Actinomyces are Gram-positive anerobic bactera, not fungus in 1960s [8].

Cervicofacial actinomycosis is usually associated with soft tissue of chin and neck area and make multiple fistula on skin with swelling. It is characterized by features that infection spreads ignoring anatomical plane. Infected skin has abscess with purplish red and indurated, wood-like area. Special sulfur granule is observed in fistula drainage. Since another fistula appears when the former fistula disappears, extensive scarring and facial deformity in prolonged duration of untreated patient with actinomycosis.

Actinomycotic osteomyelitis is rare, which accounts for about 12% of total osteomyelitis [9]. Cervicofacial actinomycotic osteomyelitis usually occurs in mandibular body, following symphysis, ramus, mandibular angle. Maxilla and temporomandibular joint are comparatively resistant for the disease and prevalence is a ratio mandible:maxilla of 4:1. It is assumed that mandible is more commonly affected than maxilla due to the lesser vascularity and the denser cortical bone, similar to osteoradionecrosis [10]. In this case, co-infection of cervicofacial and thoracic type was shown by invasion of symphysis and lung.

Pathophysiology of actinomycotic osteomyelitis has not clearly defined yet. Actinomyces can be found in tonsil, sulcus fluid, mucus membrane, infected dentin and tooth extrated area but cannot be infectious by itself. Actinomycotic osteomyelitis may be shown in the circumstance with broken balance of normal flora and pathologic change by chronic inflammation for some reason. Actinomyces itself is less invasive and toxic than other pathogens. Another bacteria help actinomyces to invade tissue with production of toxin and enzyme. These polymicrobial conditions make proper environment for growing anaerobic bacteria having low oxido-reduction potential [13]. Not forming sulfur granule of actinomyces in laboratory environment, it suggests that invasion of host immune system and colonization of associated bacteria are cornerstones to actinomycosis [14]. Once infection established on bone, the host makes inflammation response, suppuration, forming granuloma, fibrosis and making fistula.

Actinomycosis is shown clinically like tuberculosis and granuloma mimicking malignant lesion. Actinomycotic osteomyelitis usually proceeds slowly, but there were severe cases that infection invaded to mid-face, skull base, and cranium [15], and that proceed so rapidly that mandible was fractured, requiring reconstruction in immunosuppressive patient [16]. It is very important to diagnose actinomycosis, but it is reported that usual bacterial examination can confirm actinomycosis in less than 50% and first visit examination in less than 10% [17]. Four case series of actinomycotic osteomyelitis of Sezer et al. [18] reported to fail to make definite diagnosis of actinomycosis by usual microbiological examination. If the examination are failed repeatedly and delayed, it can get more inaccurate by effect of antibiotics. In this case, biopsy is highly recommended for diagnosis [19]. Actinomyces are strongly stained by H&E and Periodic acid-Schiff, Giemsa (GMS), especially filaments are well-shown in GMS [20].

In this case, there was no collection of actinomyces in first test. After several test, penicillin-resistant , . , candida was found but not found actinomyces at all. Definite diagnosis is performed by biopsy of mandible and lung. When actinomycosis is highly suspected clinically, biopsy helps more accurate diagnosis, as well as scrutinizing microbiological test.

It can be treated long-term antibiotic application in case of cervicofacial actinomyces localized in soft tissue, but when osteomyelitis is accompanied as this case, surgical intervention is essential. If acute abscess formation and necrotic tissue exists, surgical treatment is also required to distribute antibiotics more effectively. Antibiotic treatment for actinomycosis usually consists of 2–6 weeks of penicillin antibiotics by intravenous injection and 2–12 months of amoxicillin oral administration after IV [21]. Tetracyclin, minocycline, erythromycin, cephalosporin, sulfonamide, streptomycin can be used If patient has allergy for penicillin. In case of penicillin-resistant bacteria, clindamycin can be used by oral administration [22]. In this case, penicillin-resistant . , . is detected, ceftriaxone and vancomycin was prescribed intravenously. Doxycycline was also prescribed through oral administration over 10 months after discharge.

In conclusion, early and thorough diagnosis, appropriate surgery, long-term administration of antibiotics is required for actinomycotic osteomyelitis. When actinomycosis is clinically suspected, biopsy is recommended that cannot be diagnosed by typical microbiological culture test. 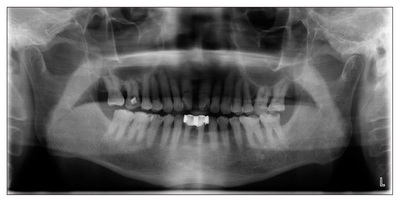 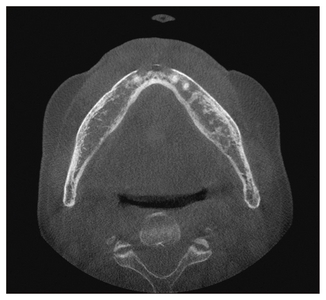 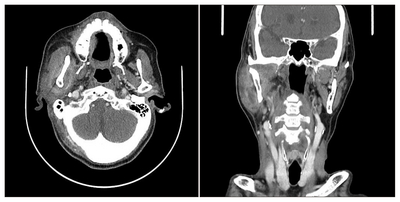 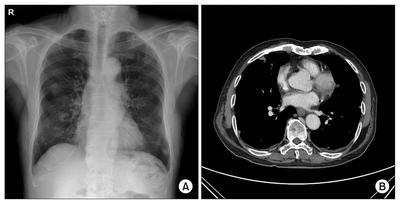 Fig. 4. (A) A pathogen similar to tuberculosis is seen in the left and lower lobe of the chest radiography. (B) Mild abscess and sclerosis are seen in chest computed tomography. 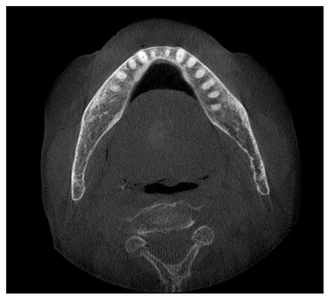