This study was supported by research fund from Chosun University Dental Hospital, 2020.
Received May 26, 2022; Revised June 10, 2022; Accepted June 11, 2022.
This is an open-access article distributed under the terms of the Creative Commons Attribution Non-Commercial License (https://creativecommons.org/licenses/by-nc/4.0) which permits unrestricted non-commercial use, distribution, and reproduction in any medium, provided the original work is properly cited.

Abstract
Temporomandibular joint osteoarthritis (TMJ OA) causes destruction of the temporomandibular joint (TMJ) and can lead to occlusal changes such as anterior open bite in some patients. Consequently, these patients may experience difficulty in chewing food items and exhibit abnormal functional habits such as bruxism, preventing healing of the TMJ condyles. Treatment protocols include the use of traction appliances to reduce stress on the condyles. Unstable occlusions can lead to weakness of the masticatory muscles which, in turn, worsen the occlusal changes and complicate pain management. Therefore, the current study evaluated the condition of the masseter muscle using ultrasonography and educated patients on the execution of gum-chewing exercises for muscle strengthening. It also aimed to assess the effects of traction appliances and strengthening exercises on the masticatory muscles of patients with occlusal changes caused by TMJ OA.
Keywords : Dental occlusion; Intermaxillary traction appliance; Muscle weakness; Open bite; Osteoarthritis; Temporomandibular joint

The temporomandibular joint (TMJ) is a complex structure made up of a skeletal system, masticatory muscles, and ligaments [1]. Temporomandibular Disorders are typically associated with pain as a consequence of impairment of the masticatory muscles and inflammation of the ligaments and surrounding tissues [2]. This, in turn, can lead to changes in the occlusion [3]. Additional factors that can lead to occlusal changes include edema associated with capsular ligament inflammation, retrodiscitis, and the presence of abscesses [3]. Unilateral lateral pterygoid muscle spasms can also lead to occlusal changes characterized by precontact of the opposing canines [4]. Management of these reversible changes through appropriate medication and physical therapy can result in significant improvements [1].

Orthodontic and surgical treatment methods can be recommended in patients exhibiting irreversible occlusal changes and no evidence of progression in condylar changes [7,8]. Intermaxillary traction appliances can be used in patients with AOB malocclusion and progressing TMJ OA [9]. Unstable occlusions can also lead to weakness of the masticatory muscles which, in turn, can worsen the instability and make pain management difficult [10].

Therefore, this study evaluated the condition of the masseter muscle using ultrasonography and educated patients on the execution of bilateral gum-chewing exercises for muscle strengthening [10]. It also aimed to assess the effects of using intermaxillary traction appliances and strengthening exercises on the masticatory muscles of patients with occlusal changes caused by TMJ OA. The study protocol was approved by the Ethics Committee of Chosun University Dental Hospital (approval no. CUDHIRB 2201 022), and the need for collecting written informed consent was waived by the committee.

A 14-year-old female patient visited the Department of Oral Medicine at Chosun University Dental Hospital in 2020 with a chief complaint of restricted mouth opening and spontaneous pain in the TMJ bilaterally. The patient had a history of abnormal functional habits such as bruxism and clenching of teeth. Clinical examination revealed restriction of active (AMO) and passive mouth opening (PMO) to 30 mm with a hard end feel. The patient exhibited overbite (OB) and overjet (OJ) of −1 mm and 0 mm, respectively, AOB occlusal changes, and pain associated with and restriction of mouth opening. Cone beam computed tomography (CBCT) examination and analysis of yellow stone models were carried out to identify the causes of the occlusal changes, and the former showed erosive changes in the cortical bones of the left and right mandibular condyles while the latter demonstrated stable occlusion (Fig. 1). The AOB occlusal changes were believed to be caused by degenerative arthritis and advanced disc displacement without reduction of the TMJ, and the treatment protocol included physical therapy and medication.


However, the patient’s AOB was seen to have increased after two months of treatment, and an intermaxillary traction appliance fabricated in the dental laboratory (Dental A, Seoul, South Korea) using a 1.5 mm orthodontic sheet (Duran, SCHEU, Iserlohn, Germany) and designed so as to cover the entire tooth was recommended (Fig. 2). A lingual button (Daesung Medical Co., Ltd, Seoul, Korea) to hang an orthodontic elastic band was attached to the canine and premolar area of the intermaxillary traction appliance (Fig. 3) and, after three months of treatment, the patient’s occlusion was seen to be almost stable with tight contacts (Fig. 2). However, evaluation of the masseter muscle using ultrasonography showed weakness during contraction (Fig. 4) and, in order to maintain the tight contacts in the occlusion and manage pain, bilateral gum-chewing exercises were recommended. These were to be executed simultaneously with treatment using the intermaxillary traction appliance. Similar to a previous study, the gum-chewing exercise protocol for the purpose of strengthening the masseter muscle included placement of half of a piece of chewing gum on both molars and application of equal chewing force bilaterally 1 to 2 times a day for a period of 15 minutes [10]. Six months after treatment, the cortical bone of both mandibular condyles was seen to be thicker using CBCT imaging (Fig. 1). No evidence of relapse was observed, and the stable occlusion was maintained successfully.

A 31-year-old female patient first visited the Department of Oral Medicine in Chosun University Dental Hospital in 2017 with a chief complaint of hearing a noise in the right jaw upon mouth opening. Interview examination revealed a history of abnormal functional habits including bruxism, while clinical examination showed an AMO of 38 mm, PMO of 45 mm, and no evidence of pain upon mouth opening. In the maximum intercuspal position, occlusal contact was observed only in the second molar and tight occlusion was seen to be absent. The OB and OJ values were 1 mm and 4 mm, respectively. Panoramic radiography showed destructed change in the left TMJ (Fig. 5). CBCT imaging showed changes in the left and right TMJ (Fig. 6). Serum investigations, recommended due to evidence of severe bony destruction, showed an absence of rheumatoid factors.


The patient revisited the clinic with a chief complaint of severe occlusal changes after two years. Clinical and panoramic radiography showed increased bony changes in the right TMJ (Fig. 5). Lateral cephalometric radiography showed a rotation of the mandible in a downward direction, resulting in an AOB while CBCT imaging showed increased severity of bony changes in both TMJ (Fig. 5, 6). Medication could not be recommended as the patient was trying to conceive. Therefore, physical therapy and the use of stabilized occlusal appliances for the treatment of abnormal functional habits such as bruxism and clenching were recommended. However, AOB was seen to increase during treatment with a stabilized appliance, necessitating the use of an intermaxillary traction appliance instead (Fig. 7). This resulted in a gradual decrease in the AOB over a period of seven months (Fig. 7). After examination of the masseter muscle using ultrasonography, bilateral gum-chewing exercises were recommended for maintenance of stable occlusion (Fig. 4). CBCT examination in December 2021 revealed progression of bony changes in both mandibular condyles, and the patient was referred to the Department of Oral and Maxillofacial Surgery where, following 6 months of follow-up, she opted to undergo surgical reconstruction of the TMJ.

Occlusal changes may be caused by a variety of factors, with numerous studies focusing on the etiology and treatment of changes such as AOB [11-13]. However, in many cases, the cause of the occlusal changes may remain unclear [12,13]. The current case report presents two patients with AOB caused by TMJ OA and bony changes in the mandibular condyle [5,6,14]. Occlusal changes and rotation of the mandible in a downward direction can occur in presence of severe bony changes [5,14]. TMJ OA, especially rheumatoid arthritis, is often associated with an increased incidence of occlusal changes caused by the rapid progression of changes in the bone structure [15,16]. Juvenile idiopathic arthritis, a rheumatoid disease, can also lead to rotation of the mandible in a downward direction and occlusal changes such as AOB [17,18].

Orthodontic and orthognathic surgical treatment may be considered in patients with occlusal changes such as an AOB [7,8]. In patients exhibiting progression of changes in the mandibular condyles caused by TMJ OA, those treatment measures should be postponed until cessation [5]. However, the increased load on the TMJ caused by occlusal instability may also play a role in the persistence of these changes [5,6]. Increased frequency of abnormal functional habits such as bruxism and clenching is associated with decreased occlusal stability, and these habits can further worsen condylar changes by increasing the load applied [6,19]. Intermaxillary traction appliances may be considered as a treatment option in such cases [9].

In this study, the patients were treated using an intermaxillary traction appliance, which creates occlusal contacts only in the posterior teeth, thus providing leverage. An orthodontic elastic band is also hung on a button on the appliance and the consequent forces are applied on the mandibular condyle, relieving loading. Although these oral appliances cannot restore the occlusion to the previous state, the traction force can help decrease further occlusal changes and loading of the mandibular condyles [8,10].

The intermaxillary traction appliance is a non-invasive treatment method used in patients with occlusal changes such as AOB [9]. However, this method may be unacceptable in patients with very irregular teeth or severe undercuts due to increased discomfort associated with use of the device [9]. In this case, traction using an orthodontic elastic band following implantation of a correction screw in the alveolar bone of the maxilla and mandible may be considered [20]. However, this is more invasive than the intermaxillary traction appliance and is, therefore, dependent on the patient’s compliance [20].

The intermaxillary traction appliance is unsuitable for prolonged use and should be removed upon improvement of the occlusion [8,10]. However, this can, in turn, lead to relapse of unstable occlusion [10]. The masticatory muscles play an important role in maintaining the stability of the mandible [10]. In general, when the facial skeleton is vertical, the masseter muscle may become elongated in the same direction compromising maintenance of a stable mandible [10,11]. Therefore, strengthening of the masticatory muscles is essential for occlusal stability and, in the current study, muscle activity was evaluated by assessing the thickness of the masseter muscle at rest and during clenching using ultrasonography [10] (Fig. 4). In case of evidence of thin masseter muscles with little change upon contraction, the patients were advised to carry out bilateral gum-chewing exercises to strengthen the muscles [10]. This method can activate the closed masticatory muscles and increase the stability of the mandible, thus reducing risk of relapse upon removal of the intermaxillary traction appliance [10].

However, not all AOB patients can use intermaxillary traction appliances and those exhibiting skeletal AOB should undergo orthognathic surgery or orthodontic treatment instead [5,7-9]. Therefore, consideration of the stability of the previous occlusion through analysis of models is essential prior to recommending treatment using an intermaxillary traction appliance [9,10,20]. However, not all patients who have undergone traction treatment present normal occlusion thereafter and prosthetic or orthodontic treatment is recommended if the occlusion is unstable even after gum-chewing exercises are performed for activation of the masticatory muscles [9,10]. 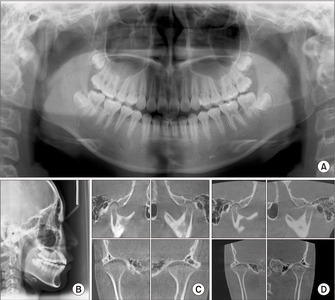 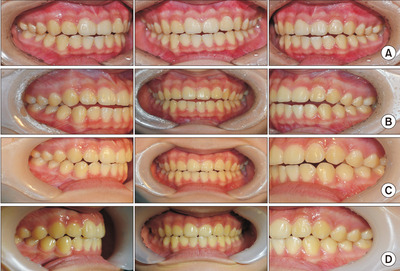 Fig. 2. Occlusal photographs of the patient. (A) Occlusion at the first visit, (B) increased open bite with clockwise rotation observed after two months, (C) occlusion after wearing the traction appliance for two weeks, and (D) occlusion after three months.

Fig. 3. The patient wore an intermaxillary traction appliance with buttons attached to the upper and lower canines and the second premolar. 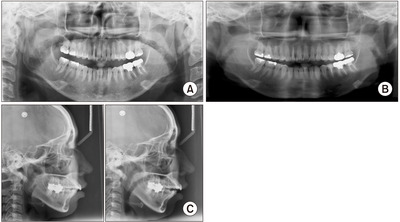 Fig. 6. Cone beam computed tomography evaluation of the patient. Condylar changes were seen to have increased over the two years between the first (A) and second (B) visits. 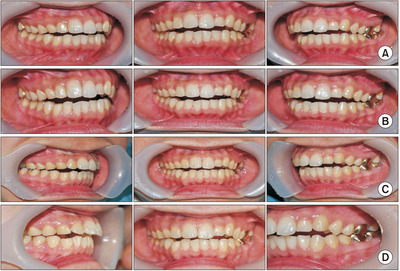